What is the boiling time for Slippery Jack mushrooms? 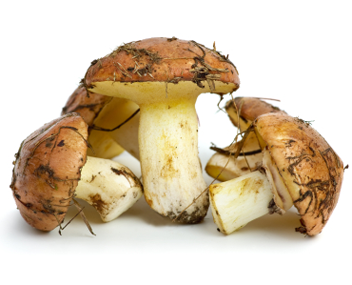 Fresh Suillus are cooked in water which is brought to a boil. Then the mushrooms are put in new salted water and cooked for 30 minutes with no lid.

Suillus are cooked for 40 minutes in a multicooker set to "Stew" program.

How to clean Suillus before cooking

1. Suillus shouldn't be soaked before cleaning as they are quite wet.
2. For easy cleaning lay out the Suillus on the grids or baking trays and leave them to dry up for a while.
3. After the mushrooms drying for half an hour, start cleaning them.
4. Clean carefully the caps from dirt and forest debris and clean the stems. There is no need to remove film from the caps, it may give the mushrooms bitter flavour, but it doesn't taste.
5. Put the cleaned mushrooms in a pot filled with cold water; drain water before cooking and boil the Suillus in it.
6. To wash off the hands after Suillus cleaning, hold your hands in 9% vinegar or citric solution for 10 minutes.


How to cook Suillus

1. Clean the Suillus, cut into slices or cubes.
2. Pour the Suillus with water so that it covers them completely.
3. Put the pot with the mushrooms on heat, add a bit salt (1 teaspoon of salt for 1 liter of water).
4. Cook the Suillus for 30 minutes after boiling.
5. Put the mushrooms in a colander and strain the broth through a sieve.

How to cook Suillus before frying

It is not necessary to boil Suillus before frying, but if you doubt in their quality or freshness, you may boil the mushrooms to assure their safety: Cook the mushrooms in the first water for 5 minutes after boiling, then in main water for 15 minutes.

How to cook for Suillus for freezing

It is not necessary to boil Suillus before freezing, but if there is a large amount of them it is reasonable to reduce the mushrooms volume by boiling them - so you will get mushroom briquettes which can be compactly placed in the freezer.
Cook the mushrooms for 15 minutes, then put in a colander for cooling, dispart into plastic or polyethylene containers and put into the freezer.
You may use the remained broth to cook soup or sauce (it can be frozen either).


How to cook Suillus in soup

Suillus for soup should be cooked before all other ingredients.
The first water is drained, the second one is used as a base for the broth: 2-2.5 liters of water are usually taken for 300 grams of Suillus to get rich broth.

- You may add citric acid or vinegar in water where Suillus are cooked for arrangements so that the mushrooms don't get dark during boiling.

- You may pickle and salt Siullus cap separately from the stems at your option.

- Use Siullus in food or make an arrangement within a day after picking the mushrooms.

- They should be stored in a refrigerator on a shelf for vegetables.

- You may remove the mushroom film under the cap and skin during cleaning as you wish.

- You should keep in mind that it is the films that give bitter taste to Siullus arrangements.

- The broth remained after Siullus boiling can be used as a base for mushroom soup or sauce or frozen in a plastic bag for further use as broth in winter time.

- Siullus broth is usually very rich, therefore it should be diluted with water if, for example, you cook soup on its base.

- Frozen Siullus are cooked for 15 minutes.


How to freeze Slippery Jack Mushrooms

How to marinate Slippery Jack Mushrooms

Cooking pickled Slippery Jack Mushrooms
Wash fresh mushrooms, dry and clean them. Simmer for 20 minutes, stirring occasionally and removing the foam, add the salt and vinegar, stir and cook for another 5 minutes. Cooked mushrooms should be washed under running water, then drain them.
Boil the water in a separate pan, add salt and sugar and vinegar. Add mushrooms to the. Put the pepper, bay leaf, fennel in the sterilized glass jars. Then put the mushrooms to the jars, pour the broth till the top of the jar. Cool it and put it somewhere into a cool place.